Childhood and Death in Victorian England 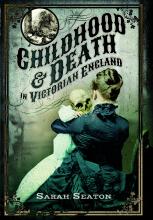 This fascinating, if grim, book researches the ways that children died [and thus by implication lived] in the period 1800 -1901. Its primary source is the reporting of publicly held inquests and court proceedings in newspapers.

Deaths from accidents in the home and at work can be attributed to a lack of any regard for the safety of children, or of the working poor in general. Unregulated child labour, insanitary and unsafe housing and a lack of adult supervision left children vulnerable. Legislation and compulsory education reduced mortality; a reminder of the necessity of legal protections for working people and their families.

Further reasons for childhood deaths relate to morally motivated legislation and the economic value of children: The ‘Bastardy’ clause of the 1834 Poor Law act placed all responsibility for illegitimate children with the mother. This coupled with the stigma, likely loss of job and home, meant that concealment and infanticide were rational and expedient remedies. Despite many philanthropic movements, it also led to a lucrative business in farming and adoption though which many children died of neglect and starvation.

Finally, there murders of children, usually by close family members. These are different in that although much has changed in the lives of children since Victorian times, these deaths resonate with current times, and seem ageless.