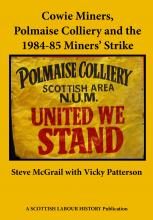 This publication reproduces two pamphlets from the years of the Scottish Miners’ Strike. The first pamphlet published in 1985 and titled 'For as long as it takes!' Cowie in the Strike. The second pamphlet, published in 1986 and titled 'One Year On, Sacked Polmaise Miners Speak Out’ Both pamphlets were written by Steve McGrail and Vicky Patterson. The strike began in Scotland at a time of pit closures and the well-established centralised organisation of the Scottish coalfield by a Tory Government whose policy to close the mines not just in Scotland but in all of the U.K.

The reader of these two pamphlets will learn how carefully the organisation of this thirteen-month strike was. Strike Centres were set up to plan picketing, to identify areas needing help and support. Food kitchens were established in miners’ welfare centres which ensured the striking men got a daily meal. Mass actions were supported in Scotland and in the UK. Many of the Cowie miners travelled to Orgreave, they knew that stopping the production of Steel could help their cause. They returned bloodied, Tam Hood, a Cowie miner said ’I saw ten to fifteen men all with wounds to the back of the heid, it sickened me, Orgreave was murder, just bloody murder, I'd not go back' All who went agreed, the police acted like savages, it was recognised that Soldiers were dressed as Policemen on the day.

What is surprising, is the decision the Strike Committee took that no Women were to be allowed to help during the strike in any way. Of course, this was not agreeable to the wives and daughters of the miners. They knew they were directly affected by the Strike, managing on strike pay was impossible without help. Visits were made by a group of the striking miners wives, mothers and daughters to the women helping the Yorkshire Miners. The Scottish women learnt how help could be organised, events were held once back home in Scotland, but they got little support.

The pamphlets are full of verbatim accounts of life during the long action, of how the NUM controlled the work of the Strike Centres, coordinating communications away from the office because the phones were tapped. It's tragic to read that eleven miners with a combined total of two hundred and nineteen years’ service to the mining industry were sacked for picketing. Each tell their story of what happened, how they lost everything and how they consider themselves to be victims used as examples by a cruel and vindictive government.

The contents of much of the pamphlets provide a primary source for any person looking for what happened in a small area of the Scottish coalfield during the 1984-85 Miners Strike. It could be said that what happened here occurred up and down the land.