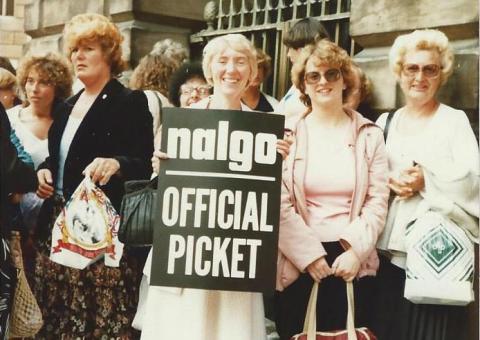 Four Hundred and fifty typists employed by Liverpool City Council went on strike in July 1981. At the time, it was the longest strike by white collar women workers in the UK.

The Typists were very poorly paid and had no access to training courses to improve their skills. Supported by their NALGO (now Unison) branch, they put in for regrading. The City Council at the time was run by the Liberal Party which took a hard line against any pay increases for the typists

To pursue their claim, the typists voted to start a “work to rule” that included refusing to correct poor grammar (!), and refusing to do the correspondence of councilors or work for Council committees. Very quickly the council began suspending the typists who were ‘working to rule’ - forcing the 450 typists to move to strike action. The strike began on the 6th July and lasted until 15th December. During the 6 months of the strike, the women on strike worked tirelessly to win their battle. The courage and commitment the women, who had hardly been involved in union activity before, was an example to all.

The new 2019 issue of the North West Labour History journal will feature an article on the Liverpool Typists Strike including interviews with some of the participants.