A Memorable Mural hidden away since 2004 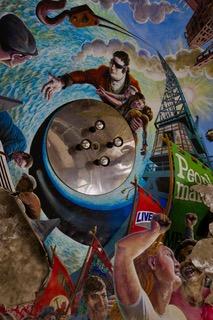 Mick Jones was an artist, trade unionist, socialist, and also Jack Jones’s youngest son. His work ranged from commemorative plates and banners to murals, paintings and stained glass. A fine example of his work was the ceiling mural that he painted in 1986 in the cupola of Liverpool Trade Union and Unemployed Workers Centre in Liverpool’s Hardman Street.

The image centres on Edward Rushton - a blind Liverpool radical republican poet and anti-slavery campaigner. Rushton also founded the Liverpool Blind School - the first in the country and the building in which the Trade Union Centre was located. Spiralling out from the image of Rushton are images of trade union activists and protesters up to the present day.

Unfortunately when the Centre closed in 2004, the mural was hidden away behind locked doors and no longer accessible to the public. It also suffered serious water damage.

The building has now reopened as an extension to the Hope Street Hotel, 40 Hope Street, L1 9DA. The new owners have conserved the mural and, on request at the hotel reception (0151 709 3000), we can see it again.