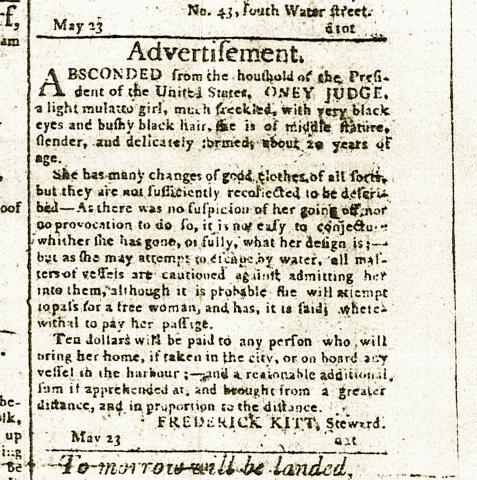 The newspaper advertisement above comes from the excellent Thomas Paine exhibition at the Working Class Movement Library, Salford.

President George Washington was a slave owner. In 1796 one of his slaves escaped. “Absconded from the house of the president of the United States - Oney Judge – a light mulatto girl, much freckled with very black eyes and bushy black hair. She is of middle stature and slender …about 20 years of age”. A reward of 10 dollars was to be paid to any bounty hunter capturing her in town and bringing her back - more if she had escaped further away. Washington never gave up hunting for Oney. He repeatedly tried to have her kidnapped. Just before he died, he sent his nephew to try to capture her but, with the help of the free black population in nearby towns, she remained free for the rest of her life.

In contrast, in March 1775 four months after his arrival in America Thomas Paine wrote an essay condemning the African slave trade. He believed that “slavery was contrary to every principle of justice and humanity”. In 1775 he was instrumental in founding the first American anti-slavery society in Pennsylvania. Shortly afterwards the Pennsylvania Assembly passed the first law in the world to start the gradual abolition of slavery.

The Working Class Movement Library exhibition is very informative about Tom Paine’s life and writings. It gives the library a chance to show off its unique collection of Paine memorabilia. It runs to the 26 March. See the Library website for opening times.