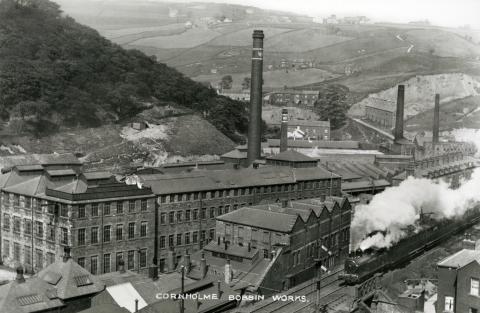 For over 200 men and boys employed by Wilson Brothers Bobbin Factory in Cornholme in the Pennines, the winter of 1911/12 was particularly bleak.

The company had started employing non -union workers to make shuttle tips at 20% under the agreed industry rates – both in Cornholme and their new non-union sister site in Garston, Liverpool. They said they would employ “whom they liked, and under what conditions they liked”. On the 3rd November 1911, the Shuttlemakers went on strike to protect the agreed rates. The company promptly laid off all 200 workers in the shuttlemaking department whether they were striking or not.

The strike ground on – through Xmas and the New Year. The strikers were collecting hardship funds, not only themselves, but also for the boys and the unskilled who were laid off as well. They received support from the local Trades Council and others. Each week the local paper reported collections of £50 or £60 for the cause.

Then on 6th March, 19 weeks after the strike began, the company issued an ultimatum. Unless the union accepted non-union labour working at rates below the agreed industry rates, they would close the Shuttlemaking Department at Cornholme with all 200 workers losing their jobs. In their reply, the strikers explained there was a principle at stake and if they gave in other employers who were paying the agreed trade wide rates would be undercut. The following week the 200 were sacked.

By 6th May 1912, the entire Wilson Brother’s workforce, about 1400 workers, in Cornholme and Garston were embroiled in dispute – demanding union recognition and improved pay. After a further 16 weeks on strike, the company finally reinstated the strikers, recognized the unions at Garston and agreed new rates of pay across both sites. The 200 Cornholme Shuttlemakers were vindicated.

We are planning to have a fuller article on the Bobbin Workers strike in the 2020 issue of our Journal.