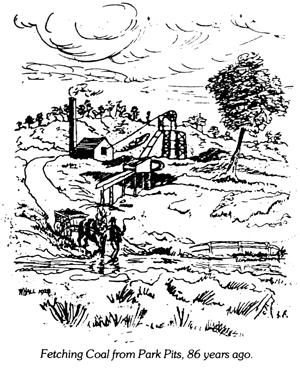 But Bill now started work in the pit. His first job was drawing dirt away from a tunnel along with another boy, whose name was Bob, and poor Bob got many a hard knock. There happened to be two doors we had to go through, and as there were other drawers coming through them, they knocked them open with their full tubs, and they had to pull them open to get through them with the empty tubs, and as it happened to be rather steep, Bill, being the biggest, had to hold the tub while Bob opened the door. The full tubs, having their wheels scotched, didn't make much noise when coming through the doors, and sometimes just as he was getting hold of the door to open it, a full tub would knock it open and knock it against him, giving him a very hard knock. But as soon as they got airways cut they knocked the doors down, which made it much better. It was here where Bill saw the first and only large boiler he ever saw rivetted together down a pit. They used steam to work the haulage rope, and raised their steam down the pit instead of having pipes coming from the top. Things went on alright until winter came. Then a strike commenced - what is spoken of as the 1881 strike. Weeks kept passing; then months. The weather was extremely cold, and there were snow blizzards lasting two or three days, until most of the roads were fully a yard or four feet deep, and some parts almost as high as the hedges. People were getting without coal, and some short of food. Mobs started marching about in hundreds, going to the pits and pushing tubs off the brow and sending a few down the pit. Things were looking very bad. Soldiers and extra police were billeted in different parts, and the miners held a great demonstration at Leigh, when the soldiers were called out. Unfortunately, someone threw a brick or stone and knocked one soldier off his horse. Then the Riot Act was read and the soldiers charged the mob. Some of them ran behind the houses and got away in the fields but most of them were driven towards Howe Bridge; then when they got about where the tram sheds now are, more policeman came from the pits, so that some of the men, while getting out of the way of the soldiers, got in the way of the policemen, and as they used their staffs pretty freely, there were many sore heads and ribs.

No doubt Old Tom Jones got enough of what he called feighten, as Bill was informed after the battle that he got knocked over a garden gate. This was afterwards spoken of as the battle of Howebridge, and some of those who came with their heads and their ribs sore vowed they'd not go to another meeting if it was on the hearth stone.

But the people were quieter after this until the strike was settled after about thirteen weeks.

There was a small skirmish in Stony Lane, Hindley, where the mob was making its way to some of the pits. The police charged them and laid about them very freely with their staffs so there were many who would go home very sore. 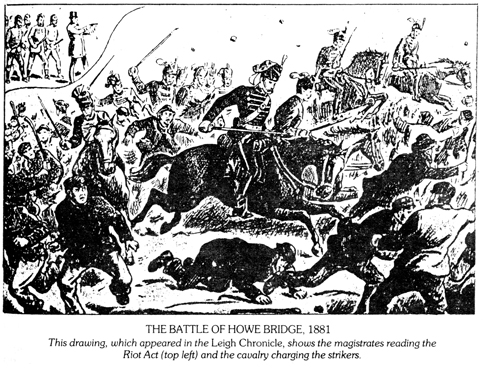 These were the only two serious outbreaks, and all the pits started work again.

Bill had a little experience, which showed pit life a bit like school life, either in knocking a thing out or in, just as they thought fit. It happened one morning that Bill and his mate, Bob, were told there was no dirt to draw from the tunnel until they had fired a round of shots, and that they must stop on the way to empty some tubs of bricks, where they were building a brick wall. Now it so happened that there had been one tub left in the tunnel, and it had been in the way of a man known as Old George, who used a stick to walk about with — a fine ash plant about a yard long — so when they had emptied the bricks they went in the engine house, and he happened to be there and started grumbling about the tub being in their way. Bill started to tell him what they had been doing when down came the stick across his back before he could explain anything.

They had now started sending coal out, and most of the drawers were young men, and as one of them was coming out with a tub when he got off the road or rails, and commenced cursing the road and the man who laid it. The man who laid it was the man who laid his ash stick across Bill's back, and was then close to him, and as he hadn't got his stick with him he gave him one in the ribs with his bare fist and gave him to understand that he must mind what he said. But this was the only time that Bill ever had the experience, or saw anyone else beaten, as it was not very common.