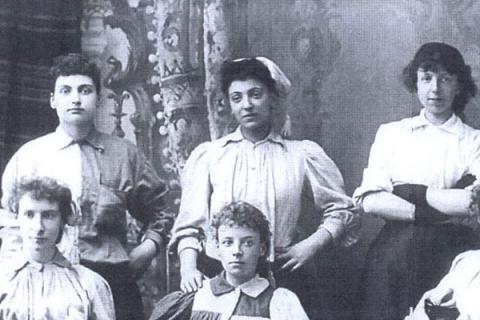 There is little doubt about the name of England’s first Black women footballer. Her name was Emma Clarke. The problem is which Emma Clarke?

On 23 March 1895 the British Ladies FC, the first Women’s Association football club, organised a match in Crouch End, London between two teams – (London) North and (London) South. The match was watched by 10,000 spectators.

This match is generally held to be the first organised women's football match in England under Association rules. This is may not be strictly true; women's teams had existed as early as the 1880's. It was, however, the first game to be played in such prestigious surroundings, and witnessed by such a large crowd. After this first match, the teams toured the country during April and May 1895.

One of the players for London South was Emma Clarke. Her sister Florence also played in this team. Newspaper reports refer to Emma’s “swarthy” complexion and as the “fleet footed dark girl on the right wing” (the South Wales Daily News).

It was originally thought Emma learnt her footballing skills on the cobbled streets of Bootle, Liverpool. A census entry for an Emma Clarke living in Bootle with her parents and siblings, including a Florence, had been found. In 2017, the Guardian reported the discovery of Emma’s Bootle roots. On the the internet this story was repeated and has became something of an urban legend. Wikipedia still claims that Emma (the footballer) was born in Bootle, and was working as an apprentice confectioner at the age of 15.

But then, new evidence came to light. It turns out another Emma Clerk with a sister called Florence, was born in Plumstead on the 2 December 1871. One contemporary report mentioned the footballing sisters were from Plumstead. This was confirmed by an article in the Kentish Independent published in 1949 to mark Florence's golden wedding. It reported that, before her marriage, Florence “had been gaining a name in soccer circles as a member of the British Ladies football team, for whom she played at inside right. The team toured England, Ireland, Scotland and Wales, and in the north played a number of men's teams.” A family descendant recalled that his grandmother told him a story of an affair which led to a mixed race child. He was told that this heritage showed in the footballing sisters’ generation and particularly in Emma.

Within a couple of years, the football club had effectively disbanded and the Clarke sisters settled down to conventional lives and domesticity. In 1899 Emma married Thomas Porter, a labourer with the local council, and they had two children, Ethel and Charlie. They continued to live locally but sadly Emma died in 1925, aged just 53. Florence married George Carver in 1899, a footballer who played left back with Arsenal (or Woolwich Arsenal, as they then were). They spent their lives in Plumstead, where Florence died in 1955.

So, it is pretty conclusive there has been a case of mistaken identity. The footballing Emma was from Plumstead, which means the final score is Liverpool 0 Plumstead 1.

It is planned that the next issue of NWLH journal (available Autumn 2021) will have a fuller article on Emma Clarke and the early history of Women’s Football in Britain – both its successes and its struggle against sexism and misogyny.

photo: Emma Clarke is in the centre of the back row