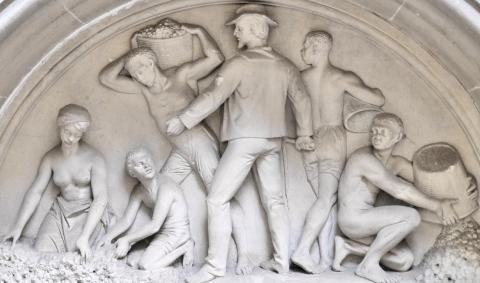 This carved relief showing black slaves being driven to work by the whip of a white overseer is in ‘Dobroyd Castle’ near the town of Todmorden. It is one of four tympana over the doorways in the entrance hall illustrating the stages of the manufacture of cotton cloth from the slave plantation in America to the weaving mills of Todmorden. The ‘Castle’, actually a grand house constructed to look like a castle, was built in 1866 and decorated to the specification of one of the sons of John Fielden MP, also called John, a member of the superrich Fielden dynasty
In 1782, Joshua Fielding moved from wool spinning to cotton spinning and his company took a leap forward. His four sons, including John, further developed the company. During the 19th Century, the Fielden family grew fabulously wealthy through their spinning and weaving mills. Their involvement in the cotton did not stop with weaving and spinning. The family were involved in the purchase and trading of raw cotton through a network of linked companies and agents in the United States. In a peak year, it would take the annual labour of 14,000 enslaved people to produce the 20,800 bales of cotton used by the Fielden Brothers in their mills. While the Fielden Dynasty grew fabulously wealthy trading raw cotton, spinning and weaving cotton, the enslaved people who produced the cotton received not one penny.
The irony is that John Fielding (1784-1849) is remembered as a major social reformer - pushing through Parliament the 10 Hour Bill which limited the time that women and young people could work in cotton factories. He also campaigned for universal male suffrage and even supported the abolition of slavery.
The next issue of North West History journal will feature an article on the Fielden family, its role in social reform and the inextricable links of its business empire to the Atlantic slave plantation economy of the United States.