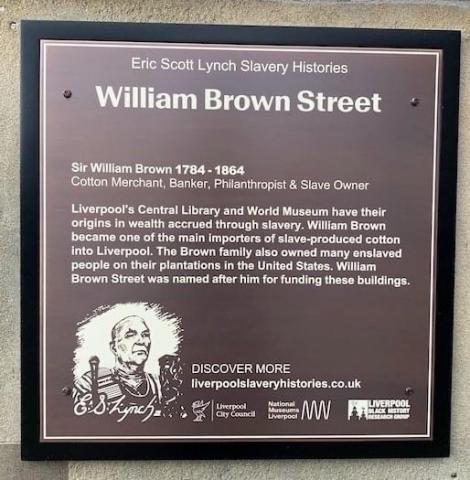 “Liverpool’s Central Library and World Museum have their origins in wealth accrued through slavery. William Brown became one of the main importers of slave-produced cotton into Liverpool. The Brown family also owned many enslaved people on their plantations in the United States. William Brown Street was named after him for funding these buildings.”

The new plaque is in contrast to an older sign placed further down the street which reads:
“William Brown Street was named after the local MP whose generous donation made the museum building possible.”

The ‘Eric Scott Lynch Slavery Histories’ plaques are named in honour of Eric Lynch, a local black activist and historian who, for decades, educated people on the Liverpool’s ties to slavery. Eric was given a citizen of honour title in 2018 for his devotion to black history education in Liverpool. He died in 2021 after years of running guided tours in the city.

Laurence Westgaph, historian and founder of Liverpool Black History Research Group submitted a list of Liverpool streets with ties to slavery prior to the council approving the project in 2020. Most of the suggested streets, which include Bold Street and Falkner Street, will see plaques installed within two years.

The council decision follows years of debate whether streets named after merchants deeply involved in the enslaving of people should be re-named. In Liverpool, the deep connection with enslaving and slave plantation products would mean re-naming a vast number of streets. Instead of re-naming, the council decided to place educational plaques in streets named after slave traders explaining the blood that they had on their hands.

Mayor of Liverpool, Joanne Anderson said: “This is a milestone moment for Liverpool in its reconciliation with its past. The unveiling takes place in the same month as Liverpool Against Racism. A powerful and unique event which will shine a spotlight on the racism and discrimination endemic in today’s society.”

Laurence Westgaph regularly leads guided walks visiting locations that are connected with Liverpool’s slaving past. Details of upcoming walks can be found on Google.