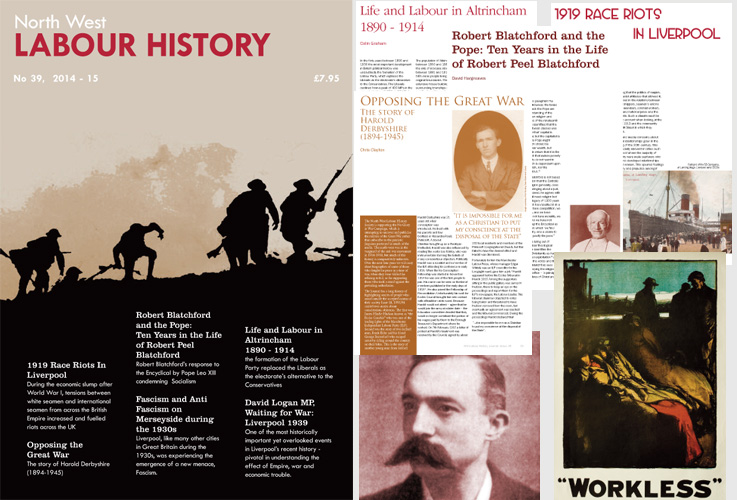 Welcome, as we move into our 41st year, to our reformatted Journal. This edition presents an interesting spectrum of North West labour history and culture via a series of important articles in line with our founding aim to provide a forum for first time and experienced researchers to publish their work. These cover three aspects of inter-war Merseyside : race relations, anti-Fascism and the looming threat of war. New light is shed on Robert Blatchford’s controversy with the Papacy which as our article notes, ‘are critical to an understanding of the interchange between religion and socialism at the end of the nineteenth century’. The other key controversy - the rise of Labour and the decline of Liberalism is explored in pre -1914 Altrincham which far from being ‘a small market town in a semi-rural environment’ enables a fascinating insight into the dialectic between the development of the ILP and the eclipse of post Victorian liberalism. This is considered more fully in Keith Scholey’s article on Hyndman Hall and how it became ‘the beacon of Hope’.

This edition, and subsequent ones, will reflect on the impact of the Great War in the North West. The Fitton cartoons selected by Alan Fowler and Terry Wyke provide a wry insight into declining social conditions.

The UN Commission on Human Rights did not recognise the right to conscientious objection until 1987. Articles by Chris Clayton and Alison Ronan recall the courage of those who endured for this right against what the No Conscription Fellowship declared ‘the monstrous assumption by Parliament that a man is deemed to be bound by an oath that he has never taken and forced under an authority he will never acknowledge to perform acts which outrage his deepest convictions’.

As always we are grateful to our contributors, reviewers and advertisers. Particular thanks must go to Mike Carter who has done a remarkable job on our new layout.

As always too, we look forward to receiving any articles from you on our region’s rich labour history.