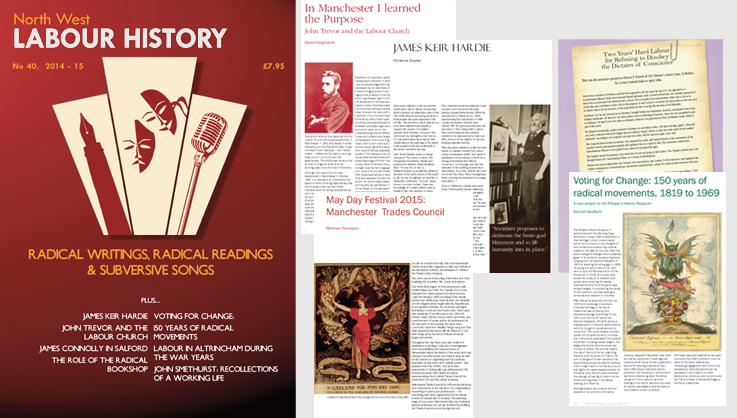 As the media and political parties have it, the working class are extinct. They are now embracing ‘Blue Collar Conservatism‘, or becoming accomplished Third Way strivers who are ‘Beyond Left and Right’. Or they are driving in droves in white vans towards UKIP.

This edition offers not only a reminder of the rich cultural heritage of working people and its continuing enrichment of our society but also a reminder that neo -Thatcherism has not swept the board. As one of our contributors observes ‘common sense ideas of a welfare state for all and a publicly-funded NHS are dubbed old-fashioned or extreme, the hope that radical literature holds out is sorely needed’. As Royston Futter remarked of the Radical Readings promoted by the Working Class Movement Library, ’ all the tickets for the Peel Hall sold out in two days. The university suggested we used the much larger Maxwell Hall. That then sold out three days later‘. So, a continuing need and interest then in radical thought and the furnishing of alternatives to an austerity society in which we are not all quite in it together.

This edition focuses on the experiences and struggles of ordinary people. Those who faced hardship in their opposition to the First World War and strove for justice on the Home Front; the campaigners from Keir Hardie and James Connolly to David Logan in Liverpool whose fight for social justice continued in the country’s darkest hours. Tony Waile’s article provides an important contribution to the cultural significance of the sea to working class culture and Jennifer Reid’s study of Broadside Ballads is a further reflection of a popular culture that has not been forgotten. The spiritual aspect of the working class movement is often overlooked. Our article on John Trevor and the Labour Church fills that gap. As our contributor Jim Leigh states, ‘How valuable a source of history ordinary people are’. We were fortunate some years ago in capturing the memories of the late John Smethurst whose recollections of his early working life and the post war Labour Movement would otherwise have been lost. We hope that you, the readers, will not permit your or your comrades’ memories to be lost and that you will make them available for us to publish.

As always thanks to our contributors, reviewers and advertisers and to Mike Carter for his customary excellent layout.

An extinct working class? No !

James Keir Hardie by Christine Clayton
In Manchester I learned the Purpose: John Trevor and the Labour Church by David Hargreaves
How valuable a source of history ordinary people are by Jim Leigh
Radical Readings by Royston Futter
Broadside Ballads - Nineteenth Century Ballads from Collections in Manchester by J.E. Reid
James Connolly in Salford by Eddie Little
Hope in the dark: the role of the radical bookshop by Mandy Vere
The Trials of Ernest Everett by Jeremy Hawthorn
Voting for Change: 150 years of radical movements, 1819 to 1969 by Harriett Beeforth
No Friends of State; Port City Writers and The Sea by Tony Wailey
Labour in Altrincham during the War Years, 1914 to 1918 by Colin Graham
Recollections of a Working Life by John Smethurst
May Day Festival 2015: Manchester Trades Council by Matthew Thompson