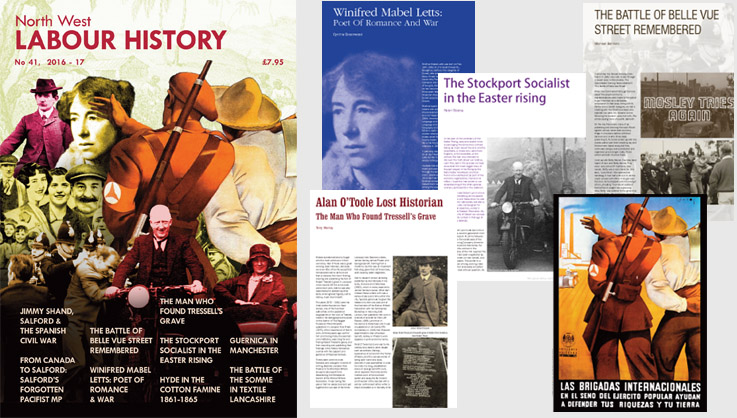 Professor Sam Davies
We were saddened to learn that Sam Davies died on the 27th August 2016.
Sam was a distinguished historian of the labour movement and was, with the late Eric Taplin, a founder member of the North West Labour History Society. He will be greatly missed. We send our condolences to Sam's family and many friends.

This editorial must start by conveying the thanks of the NWLHS Committee to Eddie Little, who has stood down as our editor after six years. Eddie has been a member of the committee for twenty years and in that time his influence on the Society has been immeasurable. Fortunately he has agreed to stay on in a consultative role, to guide the new editorial board through the pitfalls of sourcing articles and preparing them for publication.

Eddie however has not been idle in his part-retirement. He has spent the past months researching the works of James Connolly and organising We Only Want the Earth, a celebration of Connolly’s life that we are holding at the Working Class Movement Library on 1st October 2016. (See the back cover for details) Connolly was instrumental in the 1916 Easter Rising in Dublin and, although severely injured and dying, was executed by a British firing squad. We will be reading from Connolly’s many and varied writings, with Claire Mooney singing songs from the Connolly Songbook.

This Journal continues to explore a wide range of subjects we hope will be of interest to you. The story of Winifred Letts, the Salford-born poet; the remarkable life of Salford’s Canadian MP, A W Haycock; Sam Fitton’s cartoons about the Somme and the review of the living history performance relating the experiences of James H Hudson continues our exploration of alternative stories about the Great War. Guernica in Manchester brings to light a little known showing of Picasso’s great painting in a car showroom, as it toured Britain to raise funds for the Republican cause in the Spanish Civil War. The formation of the Manchester and Salford Trades Council 150 years ago is celebrated, demonstrating how workers gained strength by joining together to fight exploitation and improve working conditions. With articles about Jimmy Shand and the Spanish Civil War, Manchester volunteers in the Easter Rising, the Cotton Famine and the American Civil War, the search for Robert Tressell’s grave, Oswald Mosely and the Battle of Belle Vue Street we hope that we have produced a varied and interesting Journal.

Thank you to all our contributors, reviewers and advertisers. Once more, thanks to Mike Carter for his excellent layouts and his endless patience with an inexperienced editorial board.

From Canada to Salford:Salford’s Forgotten Pacifist MP by Christine Clayton

The Battle of Belle Vue Street Remembered by Michael Bennett

The Stockport Socialist in the Easter rising by Robin Stocks

“All work most harmoniously together”: Hyde in the cotton famine 1861-1865 by Christine Clayton

The Voice Of Lancashire by Sacha Ismail

No Power on Earth: the story of James Hindle Hudson by Christine Clayton

Love on the Dole by Charlie Fairhurst