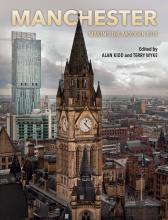 This new history of Manchester edited by two of Manchester's leading historians, Alan Kidd and Terry Wyke (both former colleagues of mine), is published at yet another significant moment in the long history of Manchester and its region, namely the establishment of the office of a mayor for Greater Manchester. It follows the successful formula of the recent history of Liverpool edited by John Belchem that was well received in both Liverpool and beyond. Liverpool University Press has also taken the decision to ensure that the book is extremely well illustrated, including many colour illustrations and maps, and to sell the paperback edition at a very competitive price. It is a format that ought to be encouraged, not least because it helps to make history more accessible.

The essays in the volume cover different aspects of Manchester’s history: Geoff Timmins, 'Roots of the Industrial Revolution'; Terry Wyke, 'Rise and Decline of Cottonopolis'; James Sumner, 'Science, Technology and Medicine'; Mike Rose, 'Voices of the People'; Mervyn Busteed, 'A Cosmopolitan City'; Dave Russell, 'Culture , Media and Sport'; Alan Kidd, 'From Township to Metropolis'; and Brian Robson,'The Resurgent Entrepreneurial City’. All the essays are designed to give the reader a clear idea of where modern scholarship has added to our knowledge of Manchester, and are written for a wider public rather than a small band of fellow academics, that group of readers G D H Cole would have called the 'Common Reader'. There is much to enthuse about in the overviews of the selected themes.

Readers of this journal will no doubt turn first to Mike Rose's chapter on popular movements in Manchester. Mike Rose as many readers will know is a distinguished social historian who has written on poverty as well as Manchester, and this chapter will not disappoint as it introduces the reader to the city of Peterloo and the history of its radical movements since 1819. Trade unions, free trade and women's suffrage are three of the themes dealt with culminating with the campaigns of the gay movement in Manchester. Likewise the chapter on Cottonopolis by Terry Wyke which discusses the history of cotton in the city from 1750 to 1950 but does so in the context of Manchester's other industries, especially engineering which still lacks a major general history for our region from the clockmakers and filemakers of the eighteenth century up to the present day. I write as someone whose parents met at Mather and Platt.

The other chapters also contain much of interest to readers of this journal. These include the origins of the industrial revolution that was to put Manchester on the international map; science and medicine, including the crucial part played by the city’s educational institutions beginning with its mechanics’ institute in 1824; the importance of immigration in the development of its social and cultural institutions as well as on the city’s economic development; the relentless growth of the Manchester suburbs that began with Georgian Ardwick; Manchester’s varied musical and sporting cultures that was more than a tale of two football clubs and the Hallé Orchestra; and the ongoing economic regeneration of the city which was underway some years before the 1996 bomb. These all help us to understand why the history of Manchester cannot be assessed within the narrow boundaries of regional or even national history. Engels was correct in emphasising that Manchester was already by the 1840s a city of international significance. Sadly, as this review was being written the world was again being reminded of Manchester.

One might have wished to have seen other general introductory essays on other aspects of the city’s history - its politics, its architecture, its transport, its industrial archaeology - included in the collection, but this would have reduced the space available to each contributor. As it stands the volume, drawing on the expertise and differing perspectives of its specialist authors, succeeds in covering much of the core narrative of the city’s modern history and it will provide an accessible entry point for the general reader into that history for some decades in the future.