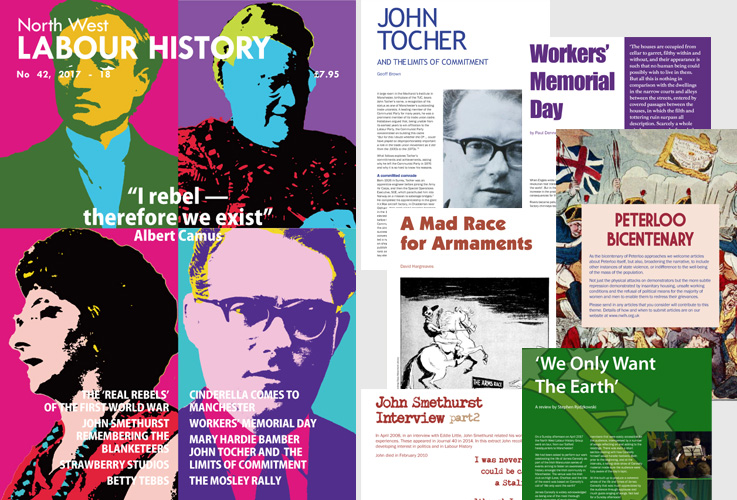 The Grenfell Tower disaster has been a sharp reminder of the contempt with which those in power often hold us lesser mortals. Political and community rights have to be fought for and, once obtained, we must ensure that they are maintained. It has been a long struggle. This journal records some of the events and individuals who helped to improve the lot of ordinary women and men in the north-west.
Betty Tebbs was a fighter. As a trade unionist she fought for improved pay and conditions for her workmates. As a pacifist she fought for a nuclear free world. We commemorate the life and achievements of this remarkable woman with an obituary and a poem.

The theme of women fighting for peace is continued with the story of the Women’s Peace Crusade in 1917-1918. Involving many North West activists, it paved the way for women’s peace activism over the next 100 years. The continuing influence of north-west activists in the socialist and peace movements is detailed in David Hargreaves' article on the 1935 Royal Commission on the Arms Trade. Trade union activists Mary Bamber, John Tocher and John Smethurst are also celebrated. And to encourage the next generation of historians see page 12 for details of a new essay competition.

The March of the Blanketeers in 1817 is an important milestone in the movement for political reform. Trevor Fisher offers an important reappraisal of this often neglected and nationally important event. Peterloo starts with the Blanketeers. We welcome all contributions for our coverage of the Peterloo bicentenary.

Chris Clayton's study of the Robert Blatchford's 'Cinderella Clubs' which fed the hungry children of industrial towns before the advent of the welfare state reveals a truly shocking level of poverty in the North West in the late nineteenth century and makes an important contribution to another hitherto neglected aspect of the region's history.

On a lighter note our feature on the fiftieth anniversary of the founding of Strawberry Studios in Stockport recalls its cultural impact regionally and nationally. In October, in partnership with the Irish Mancunian, our Society celebrated the life and works of James Connolly to a large audience at the Chorlton Irish Club.

And finally a request…over the years our contact details for members of our society has become outdated. In order to keep you informed of events and publications, and to make sure you receive your copy of the journal each year please go to www.nwlh.org.uk/updatecontacts and enter your current contact details, then we won’t lose touch. Thank you.

The ‘Real Rebels’ of the First World War by Alison Ronan

We Only Want The Earth A review by Stephen Rydzkowski

Remembering the Blanketeers Transcript of a talk given by Trevor Fisher

Betty Tebbs: A woman with no fear of the powerful by Linda Clair

A Mad Race for Armaments by David Hargreaves

John Tocher and the limits of commitment by Geoff Brown